skip to main | skip to sidebar

Tea with Gilberte (I): A Dangerously Sweet Chocolate Cake Castle with Strawberry Shards


So, on Gilberte’s afternoon-tea days, I climbed that staircase, step by step, divested already of memory and the power of thought, reduced to a creature of the crudest reflexes, and came at last to the level where the fragrance of Mme Swann’s perfume floated. My mind was full of the majestic chocolate cake set in the circle of side plates and little gray damask napkins, required by etiquette and peculiar to the Swanns.

[Gilberte] would show us through the dining room, which was as dim as an Asian temple interior as Rembrandt might have painted it, and was dominated by the architectural splendor of a cake, as cheerful and familiar as it was imposing, which seemed to be standing there as though this day was an ordinary day, just in case Gilberte might have felt a passing urge to demolish its chocolate battlements and lay waste the slopes of its steep, dark ramparts, baked like the bastions of Darius’ palace. The best thing was that, in setting about the destruction of her Ninevite cake-castle, Gilberte was motivated not only by the urges of her own appetite; she inquired also about mine, as she salvaged for me from the crumbling ruins a whole wall vanished and studded with scarlet fruit, in the Oriental style. 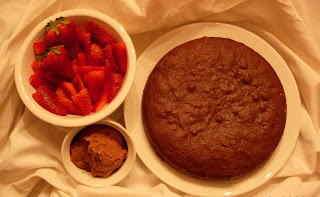 I searched recipes in preparation for baking an impressive enough majestic chocolate cake, such as would dominate the room and vision of the young narrator invited to the Swann’s for tea with Gilberte. I settled on a three-layered construction for its ready height in making itself available to the layering of words the narrator heaps upon it from memory. After baking the layers, it was in my consideration of how best to imply battlements that I became very aware of the cake as a page, the frosting as words of text and the spatula in hand as my pen. 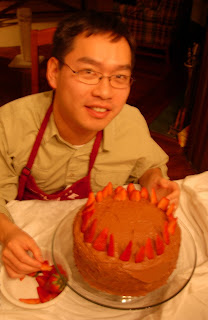 Though the “architectural splendor” (80) of this cake is laid waste, demolished, by the passing urge of Gilberte, for the reader who ventures to bake this “Ninevite cake-castle” splendid to the eye, it is the fork which brings it down. Yes, the text presents a cake figuratively laden (battlements, bastions, ramparts); and such a cake, when cut and served, presents a wedge that easily falls over backward while it is eaten. 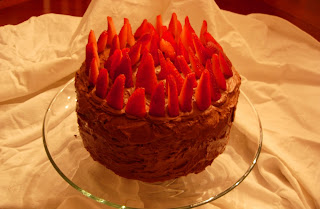 The red fruit, in both the text and to the taste, stands out in unexpected ways. In the text, the berries stand for passion and speak of the exotic, of this cake “studded with scarlet fruit in the Oriental style” (80). The experience of eating this cake is a surprise, for the flavor of the fruit stands out against the chocolate. I chose strawberries to be the scarlet fruit. Light, flavorful, colorful and more aromatic than the densely sweet chocolate, the cut length-wise quarters of strawberry also stood up in the frosting, giving my cake a more dramatic castle battlement effect than raspberries would have. The fruit stood atop the cake, en garde as turrets against would-be intruders who might try to scale its walls (or, in more contemporary places and “architecture”, as perilous shards of glass sunk into the cement atop a yard barrier). 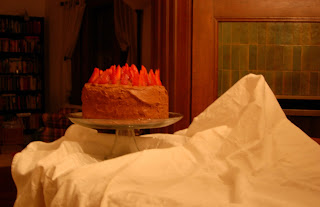 The cake tumbles, the chocolate almost burns and the icing is greasy, but the red fruit is the suggestion of majesty and the noticeable vehicle of flavor—symbolizing that the girls the narrator might want are not very approachable; they will hold their own and stand their ground. They will not be toppled over by him. 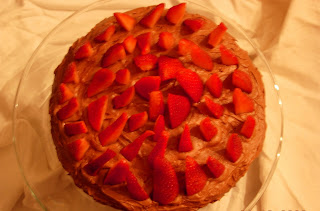 On a food note: for improvement on this chocolate cake, I recommend Ina Garten’s “Beattie’s Chocolate Cake” (from Barefoot Contessa at Home) which has a moister texture, a lighter icing and a well-rounded chocolate flavor throughout.

As to the red fruit chosen, whether strawberry or raspberry, just as Gilberte helps the young narrator to the cake, the red fruit is what attracts the reader and the eater. 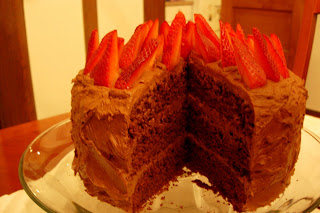 Many of my customers ask me why their chocolate cupcakes don’t taste the same at home as they do from the bakery, using the “Over-the-Top” Chocolate Layer Cake recipe from my first Buttercup cookbook. That’s because it’s not the one we make about 25 to 30 batches of everyday; if you’re looking for your favorite chocolate cupcake just as we make it in the bakery, here it is. Make it as cupcakes or as a 2- or 3-layer cake; just be sure to adjust the baking time slightly depending on the number of layers you’re making.

Preheat the oven to 350 degrees.

Grease and lightly flour three 9-inch round cake pans, then line the bottoms with wax paper.

In a medium bowl, sift together the flour, baking soda, and salt. Set aside.

In a large bowl, cream the butter and the sugars on the medium speed of an electric mixer until fluffy, about 2 to 3 minutes. Add the eggs one at a time, beating well after each addition. Add the chocolate, mixing until well incorporated. Add the dry ingredients in thirds, alternating with the buttermilk and vanilla, beating after each addition until smooth. Stir in the sour cream.

Divide the batter between the prepared pans. Bake for 25 to 30 minutes, or until a cake tester inserted into the center of the cake comes out clean. Let the cakes cool in the pans for 10 minutes. Remove from the pans and cool completely on a wire rack.

When the cake has cooled, frost between the layers, then the top and sides of the cake. Frost with chocolate buttercream.

In a large bowl, beat the butter until creamy, about 2 to 3 minutes. Add the milk slowly and blend until smooth. Add the melted chocolate and beat well. Add the vanilla and beat another minute or so. Gradually add the sugar and beat until of desired consistency.

Use and store the icing at room temperature, as the icing will set if chilled. It can be stored in an airtight container for up to 3 days. This yields icing for one 2- or 3-layer 9-inch cake, or 2 dozens cupcakes. 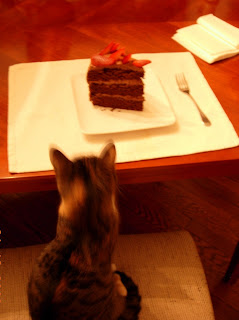 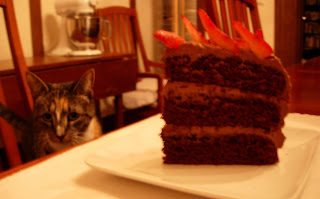 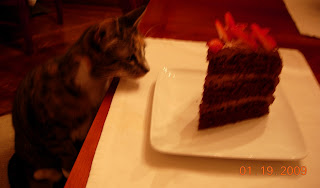